In the 1960s, Dr. and Mrs. Eugene Cozzolino bought property on Racebrook Road down from the Baldwin’s and made his home there.  They had come from a home in Orange that had a putting green on the property, so Gene decided to build another one for this house. He soon felt limited by just one green, and asked his north neighbors, Clarence and Margaret Baldwin, if he could build a tee on their property to play to his green. Since they were no longer farming that area, the Baldwins agreed to allow Eugene to build his tee on their property to play to his green.

After the first tee on the Baldwin property, he asked for permission for a green. This green is now today’s third green.

As the course grew, the Cozzolinos invited friends to become “members” and share the expenses of maintaining their “Ten Acres Golf Course”. Under their management, it expanded to six greens and nine tee positions. Sadly, Barbara Cozzolino passed away in the late 1970s, and Gene decided it was time to leave Connecticut. In 1978 he politely informed the next generation of Baldwins, Mac and Sue, that they now owned Ten Acres Golf Course. 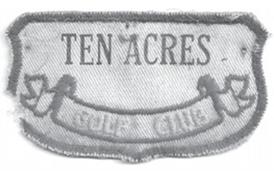 Since the Baldwin family took over management of the course, they have made changes in the layout as well as the name. And since there was more land available, the classic criss-cross fairways of Ten Acres became the now 50 acre  18 hole configuration of today's Homewood Acres Golf Course Association, Inc. Now the course is made up of par 3s and par 4s on its 9 greens and 18 tee positions. There are also two additional greens located closest to Racebrook Road, which are used as practice greens.  And best of all members are allowed to use these two greens, sand traps, and practice fairway to practice their game from sunrise to sunset, year round. The course is now managed and maintained by Mike Baldwin, Cynthia Baldwin and Dan McKee.